So we all have those weird things about us that happen in our lives. One of mine is that when I was in college I suddenly started liking country music. Until that point, I really despised country music even though I grew up in Georgia.

I was going to college in Boston, so maybe it was a function of me missing my regional identity. Watching CMT suddenly felt right, and so I watched country music videos on a near-daily basis, eagerly learning the rich history and classics of the genre.

Along those lines, I’m excited in kind of a youthful way about the new movie Country Strong. It looks like a Walk the Line rip-off set in modern day, but with Tim McGraw and Gwyneth Paltrow in the leading roles instead of Joaquin Phoenix and Reese Witherspoon. Gwyneth Paltrow sings in the movie,  starring as a mid-career country music star who is in a period of crisis while married to her manager (real-life country music star McGraw). Several new, younger stars enter the picture, and tomfoolery ensues as well as some inevitable reckoning and life lessons. Did I say that the movie also has trains? I love trains!

Based on Paltrow’s singing performance on the Country Music Awards several weeks ago, she ain’t half bad. That makes me more excited for the movie, and I think that the title song (also named Country Strong) is pretty good.

I’ll post the preview for Country Strong below, but before I do I’d like to talk about another classic country music movie.

If you grow up in the South, like country music, and play the guitar (as I do), there comes a time in your life when the appeal of Nashville, Tennessee strikes you like a plague (later on it’s Austin, Texas). 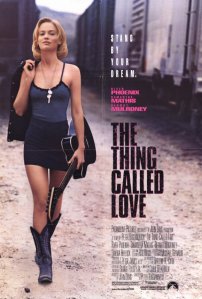 My cousin lived in Nashville for a while, and I visited him during college. At the time he had a movie poster on his wall for a movie called The Thing Called Love. He told me that a girl he was friends with worked on the movie. I kind of idolize my cousin (still do actually!) so I KNEW that movie must be really cool. So sometime soon thereafter I watched it.

The Thing Called Love stars Samantha Mathis, River Phoenix, Sandra Bullock, and Dermot Mulroney. Mathis plays a young singer-songwriter trying to make it in Nashville. She meets other young musicians, and quickly falls for Phoenix’s character, a talented, mysterious, and dark rebel. The movie has good music and a hit song from Patty Loveless. It glamorizes the Nashville experience (to a young person it looks really fun!) and the movie charts a predictable course.

It’s definitely one of those movies that makes you understand how much of a waste it was that Phoenix died of a drug overdose (see Running on Empty as well to see how talented he was). Of course now we can also lament the similar, “is it a stunt or not?” downfall of Joaquin Phoenix. Hopefully he makes a comeback.

So without further ado, here are the trailers for The Thing Called Love and Country Strong.

P.S. I kind of miss the old style previews, they still kind of do it for me.